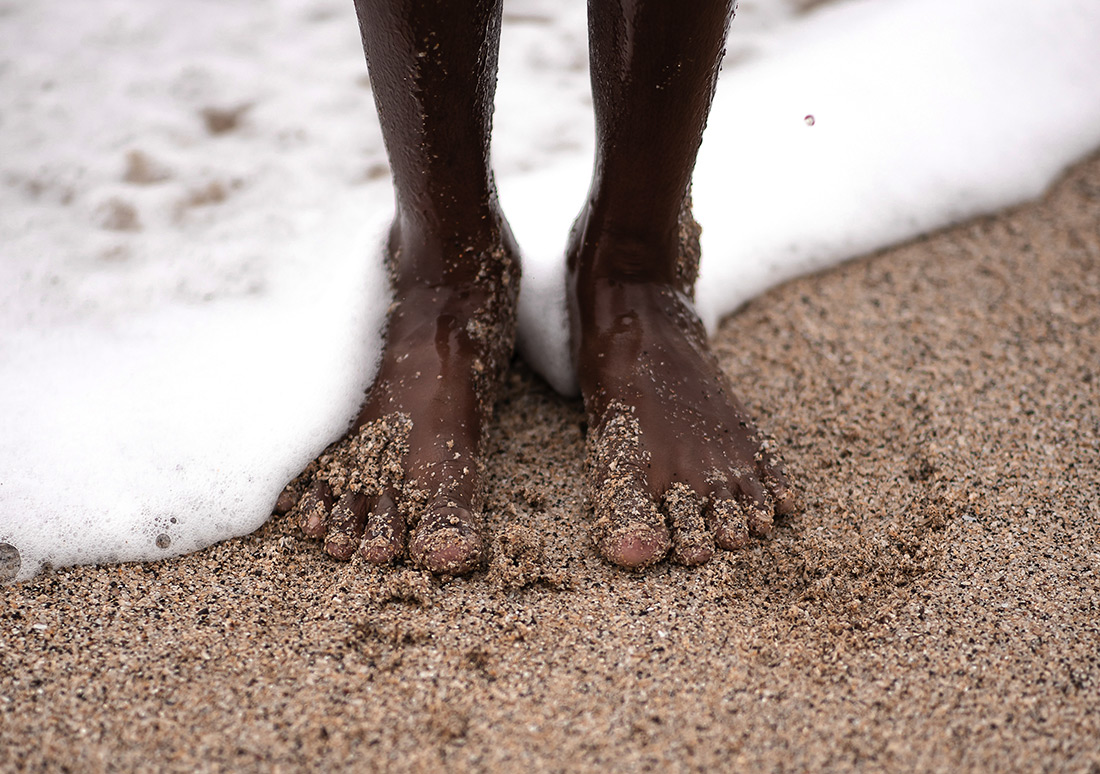 Before you read this poem to the children, talk with them about how wherever we are there are sounds. Get them in pairs talking about some sounds they have heard in different places. Remind them to think about holiday places as well as neighbourhood places, indoors and outdoors.

Read them this poem. Give them copies. Get them in pairs to devise ways of reading the poem. Suggest that one could make sounds of the sea while the other reads it…or any other way. Suggest that the children could, for example, pick out keywords, put these single words on big pieces of paper and hold them up when the reading of the poem gets to that word. (There’s a Bob Dylan video of him doing this in a song he is singing.)

Ask the children in pairs to look at their copies of the poem to see if they can find any ‘pattern’ in the poem. A pattern is where the same thing happens again and again often with slight differences. They could draw or write on their copy of the poem showing how there are patterns and repetitions. (One pattern is that each time I say a phrase (like ‘the soft sea wash’), in the next line, I say, ‘see’ and then I repeat the last two words of the line before as with:  ‘see the sea wash’.

Ask the children in pairs to talk about why I might have written the poem like that. What was Michael Rosen trying to do? You could role-play it and someone pretend to be Michael Rosen and the others interview him.

Now the children are going to have a go at writing their own ‘sound poems’. They can write them any way they like. They don’t have to follow my shape or form or pattern. Say that several times. They can write their own seaside poem. Or:  they could write their own poem on any other place that has sounds. What might that be? Get them talking in pairs about what that place might be and then in the plenary share these different ‘sound-places’ and write them up so everyone can see it.

(Teaching aim here: In their poems about – let’s say it might be a street, or a market, or the wind, or a storm, or rain, or in the dinner hall – the aim is to come up with words which sound like the sounds in the place without necessarily using the famous onomatopoeia-like words like ‘smash’ ‘bang’ ‘whizz’ etc. It’s trying to find words that have onomatopoeia-like sounds in them. In my poem I chose lots of words that have the letter ‘s’ in them because I think the waves on the sand make an ‘s’ sound. If let’s say, you were doing a wind sound poem, you might say that ‘sh’ sounds like the wind. So what ‘sh’ words could you use? You can use dictionaries and Roget’s thesaurus online to find some: ‘Brush’, ‘swish’ (OK, that’s an onomatopoeia word!) , ‘shall’, ‘should’, ‘show’, ‘push’, ‘wish’, ‘rush’ and some ‘s’ words too: ‘thistle’ ‘rustle’, ‘whistle’, ‘hustle’…)

Once the children have chosen a place with sounds, you could ask them in pairs to decide what main letter-sounds fit that place. In the street, it might ‘vrrr’ (cars, lorries) or it might be several: ‘vrrr’ and the ‘bang’  of doors. So we might be looking for ‘v’ words, ‘r’ words and ‘b’ words. This ‘looking’ is best done in pairs. As I say, you can use dictionaries and Roget to help you.

When you have found a list of words that have those sounds in them, can you make up a poem that uses the words? It doesn’t have to make perfect sense. It can be just a ‘stream’ of words and sounds that make a kind of sense.

(Teaching Point: in this workshop, you are exploring the relationship between sounds, letters and words. It is ‘phonics’ but it is also ‘synesthesic’. That means that we have ways of expressing meaning through the sound of words. Onomatopoeia is the obvious way that we can do this but we can also create that in sequences of words that sound like the thing we are describing – as I did with my poem. This way we discover that what we call ‘meaning’ is not always separate from sound. It often is separate- but not always. This workshop allows us to explore, experiment and discover this. Another useful word: ‘prosody’ – exploring how poems and all writing use the ‘musicality’ of how we say words.)